Blood Angels of Khaine – a conversion

So Daughters of Khaine are my focus right now and the range of new models released by Games Workshop are fantastic. However whilst scouting around the net I happened upon this conversion to the Khinerai

I’m so pleased with how these came out! ^.^ If you know me, you know that I hate building & rarely convert/kitbash but tonight I kitbashed these Khinerai to have feathery wings instead ^.^ They look kinda valkyrie-esque, can’t wait to paint them! pic.twitter.com/5aAa69sC0z

An idea I found very attractive and interesting and decided to adapt for myself, though my intent is to use the feather wings only upon the leaders (Shryke and Harridynn)to further highlight them from the rest of the unit and to show how special and mighty they are as warriors.

And along the way I figured I’d show you how I did this conversion!

1) Box of Khinerai. Remembering that the way these kits are assembled has fixed parts going to specific bodies. So you want to turn the manual that comes with them to the latter pages where they make the last khinerai which is the leader unit for the pack. Note that an error means that the weapon arm number isn’t shown on either one (though I assume that as they are last shown GW staff assumed you’d made the rest and thus it was the only blade/javelin remaining)

2) A set of Dark Eldar/Drukhari Scourge wings of the feathered variety. These are not too hard to find if you search bits stores or ebay.

3) Standard modelling tools for assembly.
Myself I used the following tools

a) A pair of clippers to remove parts from the sprue.
b) Plastic glue
c) A GW scalpel blade
d) A file – mine is a small 900 grit half round diamond file. This is a very fine file (like the emery boards that GW makes) that is fantastic to use. Hard to find in a high grit like this, but I got mine from here (no affiliation):

Eternal Tools:
https://www.eternaltools.com/files-burnishers/small-diamond-files
Their product video is worth a watch :

1) Assemble the Khinerai model as normal (optional leave head off). This is an important step because the way the wings are both attached to the core of the body involves them having huge chunks of the body upon them; including the arms. So you’ve got to attach the wings as normal to give you the body to work with.
I also find its important to attach the weapon arms and tail as well so that when you add the new wings they will fit around the rest of the model.
The head I put on with a small bit of white-tac (same as blue-tac just white) as I wanted to have the head separate from the main body to make painting a bit easier.
Remember to follow the parts guide in the manual that comes with the Khinerai. Also note that you should remove all mould lines prior to affixing parts together. 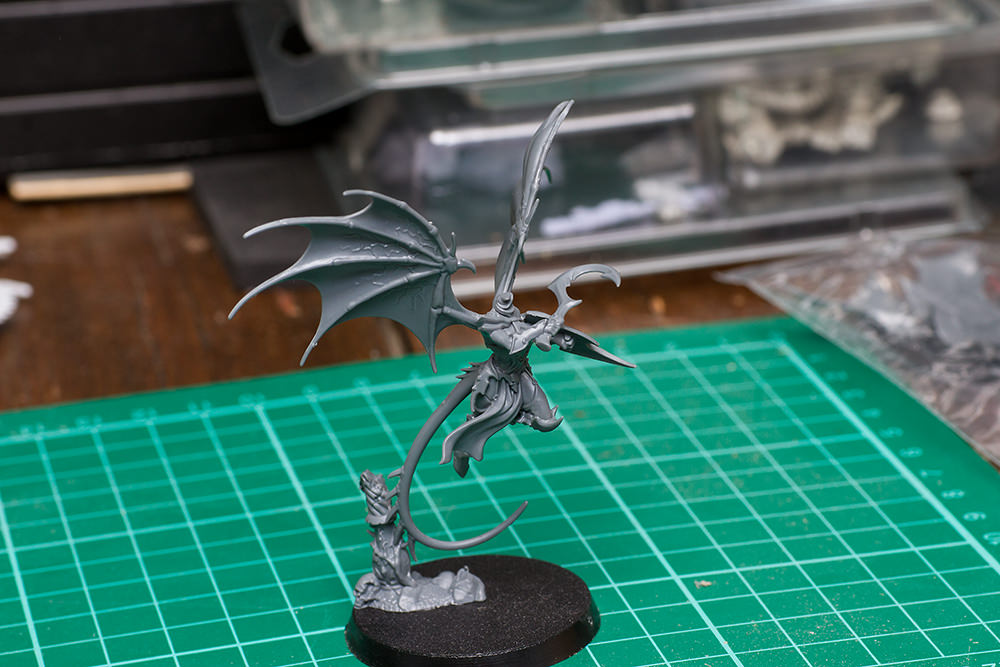 2) Once the glue is fully dry, remove the wings at the shoulders. This is a bit of careful cutting with the cutting blades. Take your time and remember if you’re not sure take off less rather than more, by taking off less you can file/scrape down to a smoother surface. 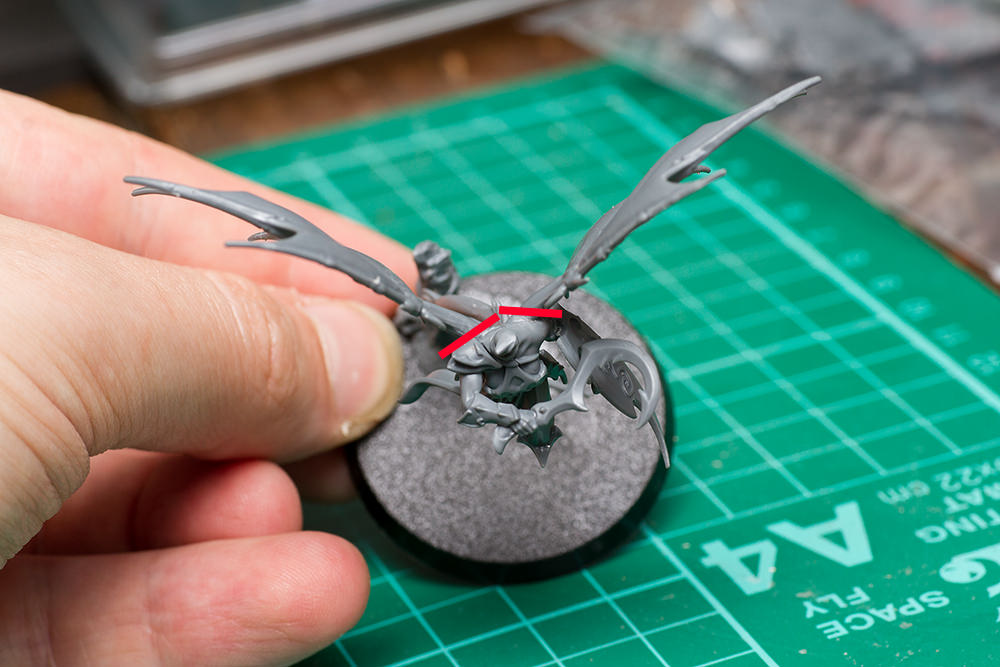 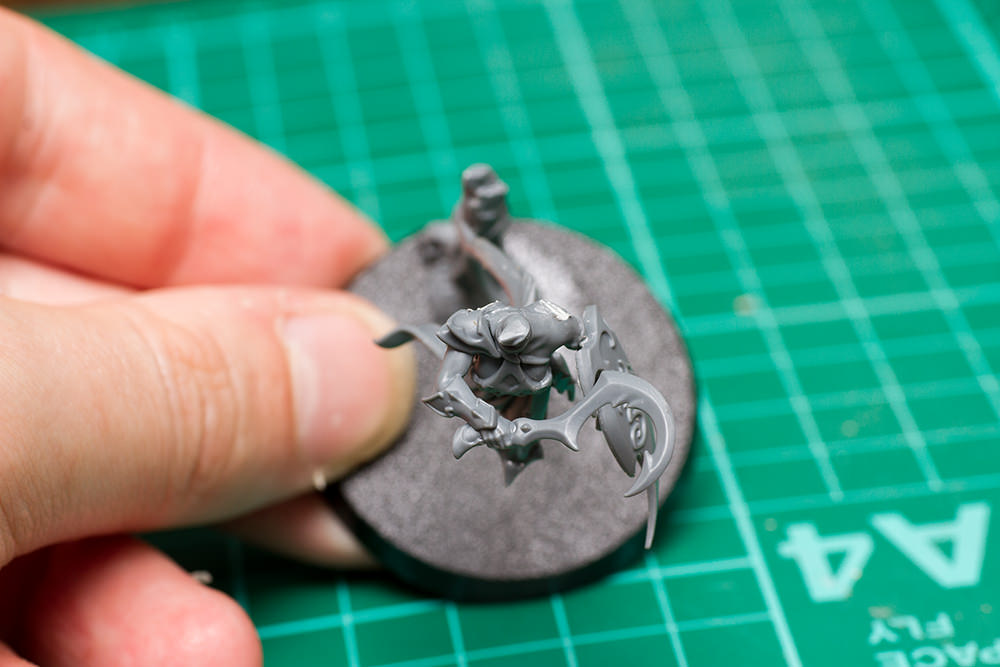 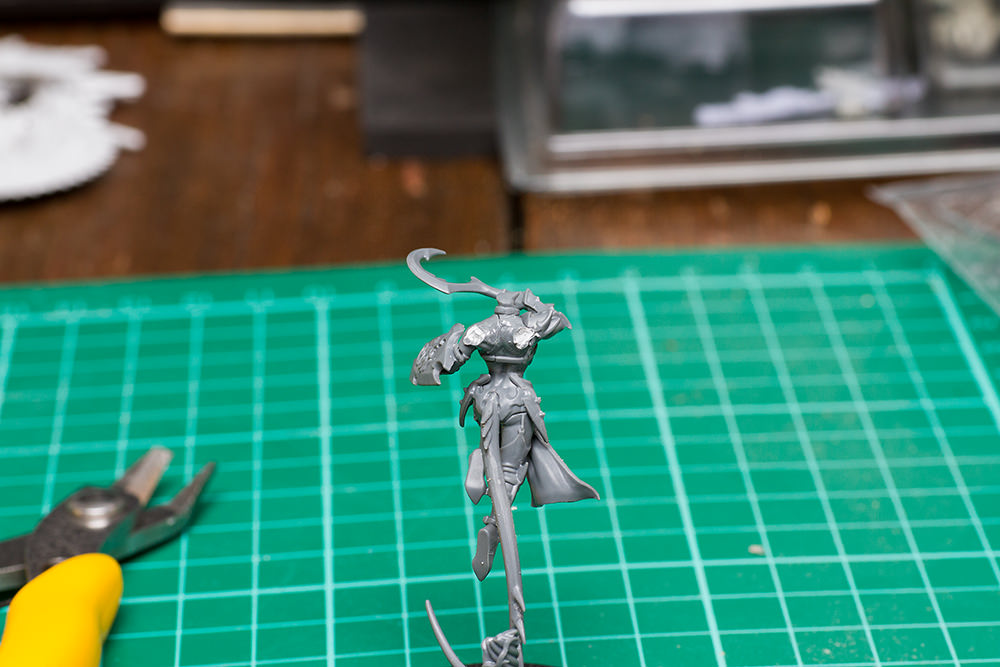 Once I’d removed the wings I then used the scalpel blade to scrape and the file to smooth over the surface areas to give a nice easy to work with surface. 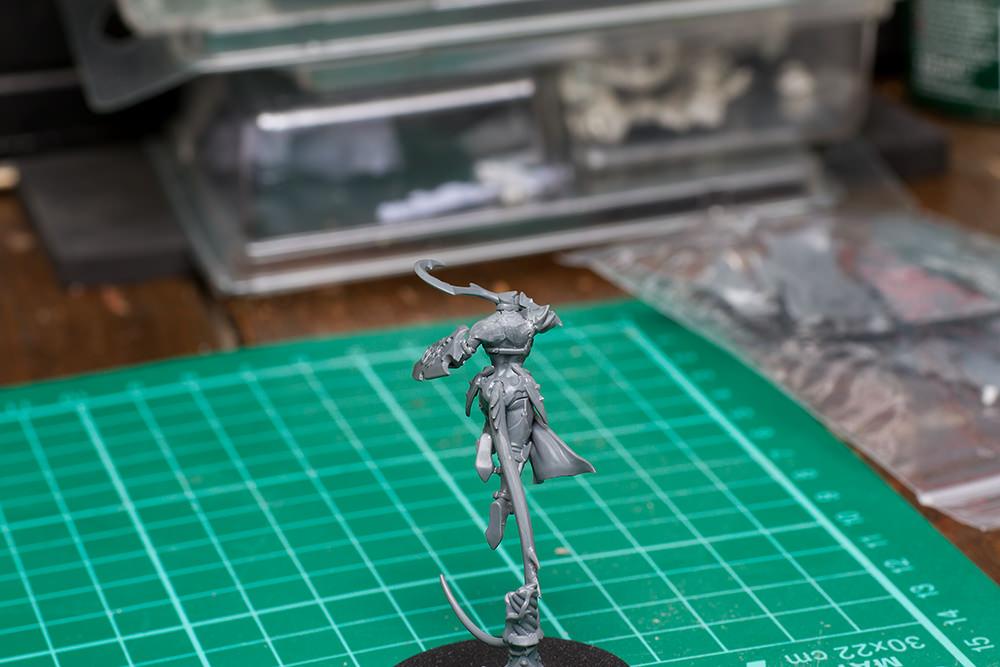 3) With the old wings removed its time to attach the new ones. Remember to clean off any mould lines from the feather wings before affixing. Also if you’ve done as I have with the head (not attached) remember to use some blue-tac or similar product (a bit of greenstuff would work too in the short term) to hold the head in place on the neck when affixing the wings to ensure that the long hair doesn’t get in the way.
Note that in my experience the horned helm with the interlocked antlers requires the most space. Though if you find you can’t easily fit the wing with this head you can just another head (the wings will already be denoting this as your leader unit so the helm has less importance).

The wing that goes onto the weapon shoulder I affix as normal without any modification. The wing that goes onto the larger shoulder with the buckler I did scrap (retaining the curve) some of the smooth surface of the wing off. This is so that the wing and feathers sit closer to the shoulder surface. I found this helped as this side of the model the shoulder is pushed out far more so, so the wing doesn’t want to be standing raised.

TIP – dry fit the wing to the model and hold it in place for a bit. This lets you practice how you are going to hold the model when you apply the glue, since there are a lot of delicate parts on these models and its a lot easier to practice without the glue getting in the way. 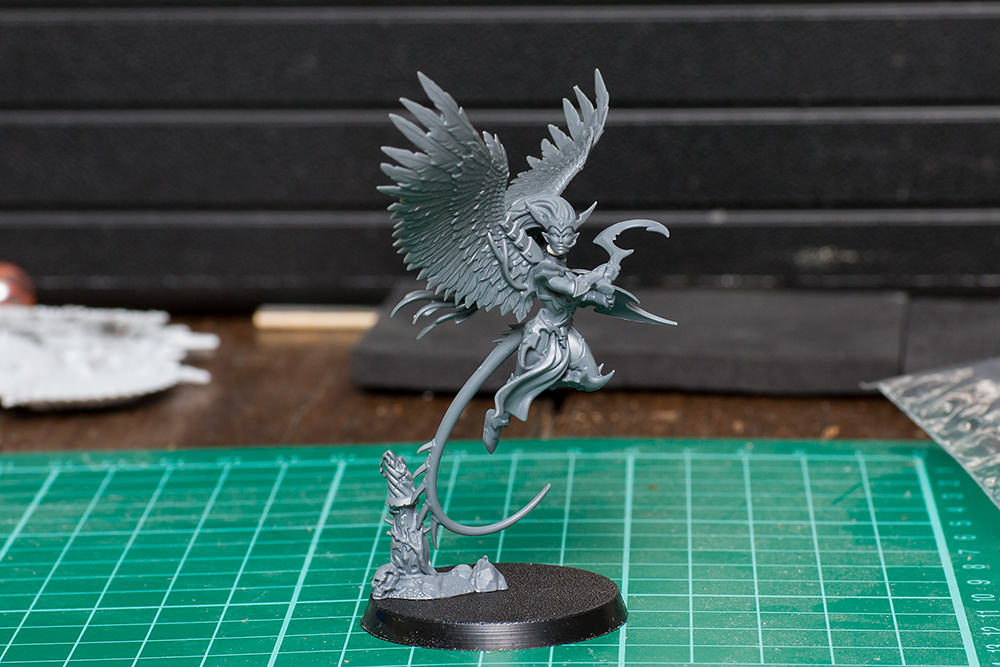 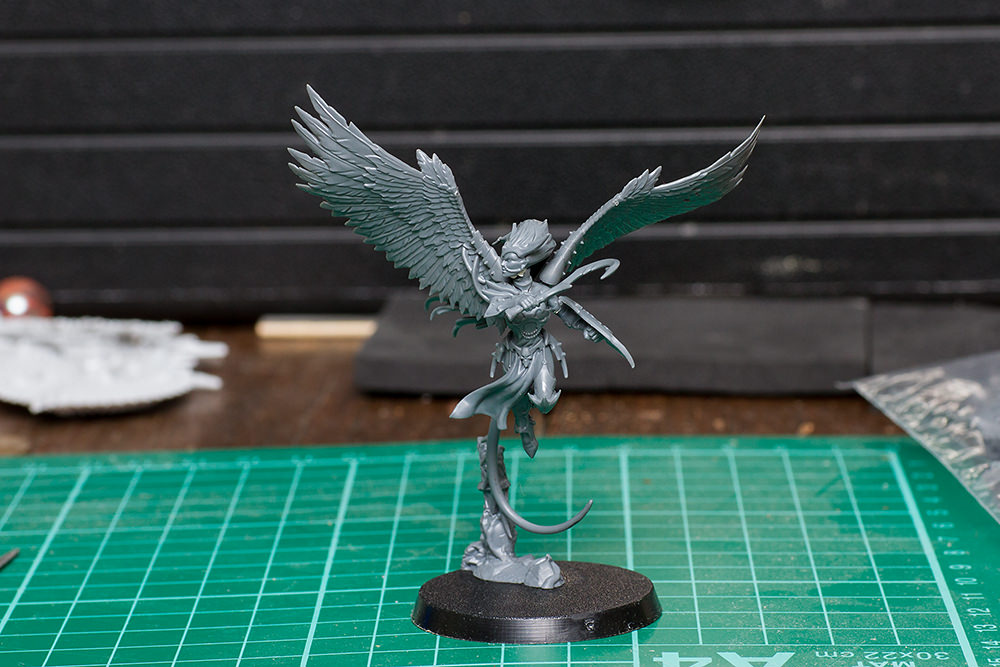 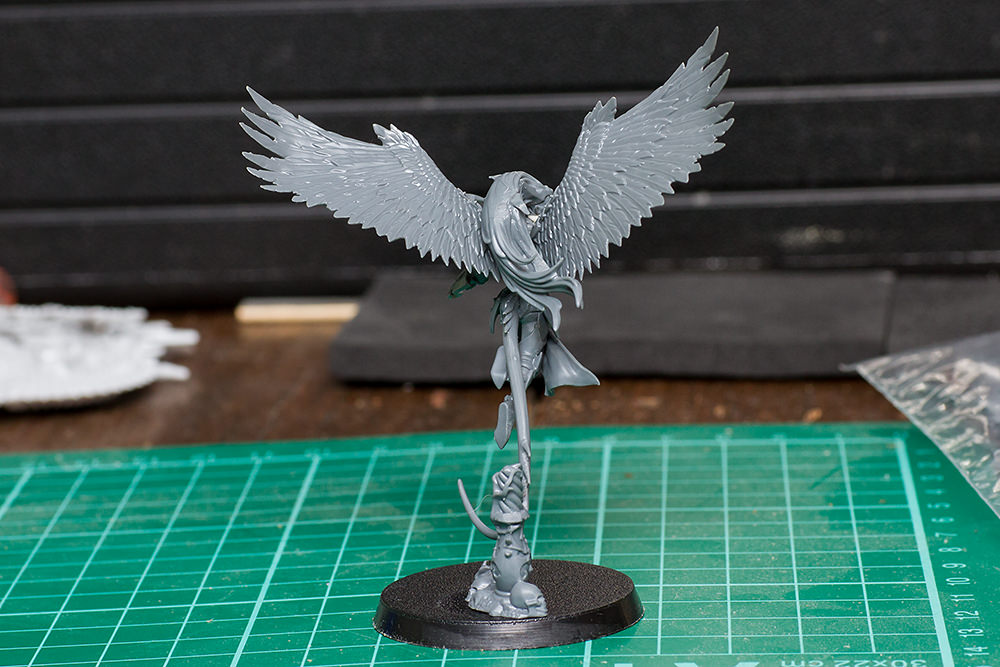 And there you have it, the completed conversion with new feather wings! Note that I might use a tiny bit of greenstuff later on these just to smooth and create a better join area around the wings. This is purely optional and might not really be needed either, but do keep it in mind as an option.