A book review of the new NOVELLA series by Black Library. 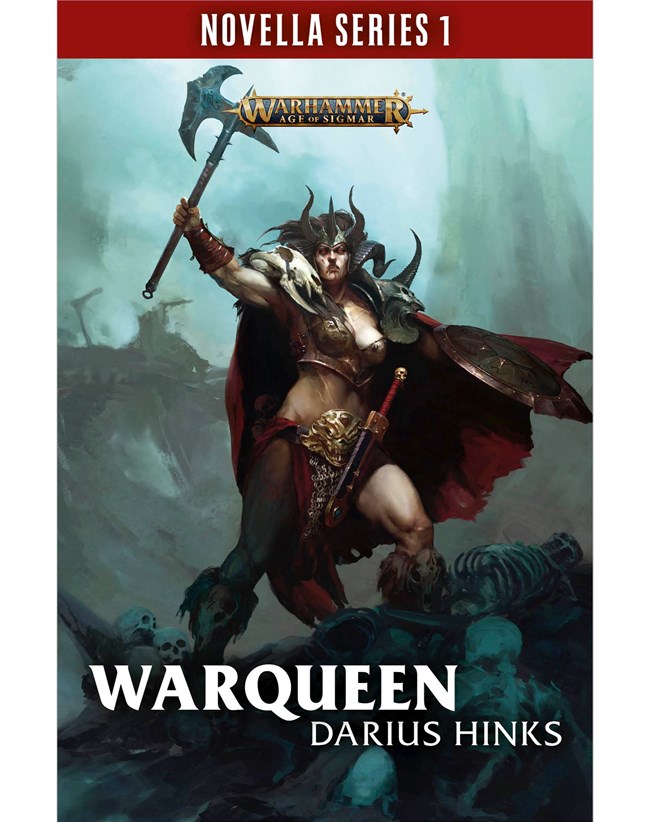 Recently Black Library published the first ten books of a new run of novellas which span their range of worlds. From the dark and polluted ruins of the Underhive of Necromunda, to the vast magical peaks of the 8 Realms of the Age of Sigmar, these books take you on a wild series of adventures. They are a nice length for an evening read each and whilst they don’t have the length of a full novel, they still have room to develop characters and give you far more flavour of the worlds they take part in.

As you can see there’s a fair smattering of stories from the fantasy and the futuristic. Some are clearly tied to major recent publications and soon to be publications, such as Horus Heresy and Gotrek; whilst others are more free form stories set within their respective worlds. As they are shorter books I will provide a short summary review for those I’ve read below.

WARQUEEN by Darius Hinks. This is a powerful story that presents a fresh angle on worshippers of the Chaos gods and focuses on the lesser known Dark Oath factions. Brave and mighty barbarian tribes that worship the Chaos Gods. If any reading have ever read any of the Conan stories/comics or seen the various films (esp the classic with Arnald) then the Dark Oath feel lifted right out of the Hyborean age. Whilst with more trust to magic than your average Cimmerian, they are still akin to that classic warlike wild image. These are not crazed nor mindless characters and they retain a stronger sense of their humanity and emotions.

Within this story is war, betrayal and discovery. Follow a mighty warqueen as she seeks to unite her people under a single banner, to forge them into a single army that can carry them beyond the plains they have warred over for generations in the Age of Chaos. To bring them into the Age of Sigmar and make them a threat for all the world to fear. I would say of all those I’ve read thus far this is my favourite of the series.

HEART OF WINTER by Nick Horth. This story is cold. Not just from the frigid lands in which it takes place, where biting winds, ice slick surfaces and frostbite are around every corner; but with the characters that fill the story with their taste for blood, slavery, betrayal and revenge. Aelf pirates without equal, who are the literal scourge of the high seas. Those who have a passing understanding of the Old World (or who have been playing Warhammer Total War 2) will recognise some mighty icons from the past appear again within the Realms as a mighty Black Ark features prominently in this tale.
Of interest this story also ties strongly into the development of the Realms and the Age of Sigmar and is perhaps one of the stories that is the most “recent” in the time line. Whilst it does not focus upon those golden warriors from Sigmar, it does show how their society and the new Order is going. Giving us an idea of the rebirth, the rebuilding and the political shifts that are taking place within the Realms. It’s a view of the world generations beyond the end of the Age of Chaos; where only aged Aelves might remember the Cursed blight that was upon the land. This adds greatly to the story and makes it a fascinating read beyond the development of the background of another faction. Those who are fans of the Daughters of Khaine would also find this story of interest, for its not just scourge Aelves who inhabit the bloody pirate strongholds. Places of slavery, death, blood and fighting attract those piests and worshippers of the bloody God of Murder.

WANTED: DEAD by Mike Brooks. Necromunda lends itself well to the short story market and this tale does not disappoint in the least. We see the classic Necromunda battle between Houses Escher and Goliath, but things are not always so simple as the might appear on the surface in this dark, dank world of the Underhive. There’s also a tale of love woven into this and of loyalties which are fine additions to the lore of Necromunda, where betrayal and selfish interests can often appear to rule much of the action. It adds to the rich tapestry of the world and shows that the Underhive, for all its lack of education and structure, is possibly one of the most varied settings in the 41st millennium.
We also get a sense of how individual each gang within a Great House is, how they are almost alone as they carve out their own little corner of the Underhive and defend it to the last against any competition.

THE BLOODIED ROSE  by Danie Ware. Welcome to the world of the Sisters of Battle, women monks of a powerful militant order who are bound to serve the one true Emperor of Mankind and protect humanity from the threats of the heretic, the mutant, the xeno and the corrupt. The story here touches at the very foundation of the war of mankind vs the darkness of the universe and follies of the long forgotten past of mankind when they originally spread through the stars in ages past.

The religious element is woven into this story well and builds a fantastic mental picture of the churches and religious order of the Sisters. Of how they worship in battle, of how prayer and unity with their sisters armours them against the darkness of the universe and how those dark forces might see to corrupt and tempt them.

The story starts off building a fantastic sense of mystery, touched with the edge of horror. Carrying the reader forward eagerly with page after page as one seeks to uncover the truth of an abandoned settlement and the dark forces that have led to its twisted, macabre end.

If you are interested in reading these stories and others in the series, then they are up for sale now. At £3 each for print or digital, or if you get them direct from the Black Library website there’s a £3 discount if you get the whole series of 10 in one go (digital or print). The price is well worth it and this series makes the fantastic in-fill whilst you’re waiting for that next reprint of Inferno Classic or the upcoming New Inferno issue 2