A book review of SKAVEN PESTILENS by Josh Reynolds 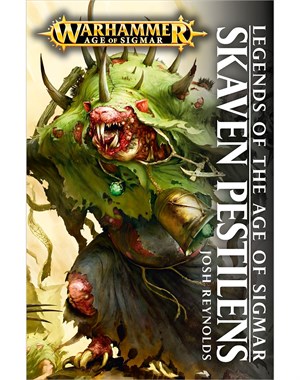 This is a special book for me as it was not only my first foray into the blighted world of the Skaven, not just my  first look at the proper lore and world of Age of Sigmar, but my  first ever full Black Library book that I read. Having spent many years as a Tyranid fan and a fringe fan of many other armies (ergo not fully invested), I’d never really delved deep into the lore of 40K nor the Old World of Fantasy Warhammer.

So from the get go I should say that I really recommend this title!

Within you discover the filth infested, back stabbing world of the Skaven of two Pestliens Clans as they fight over their conquest of a city that crumbles as their rotting blighted powers and war engines tear it to bits. The very ground beneath this vast city being burrowed into by the skaven as they feast on the flesh of the vast living wyrm that forms the foundations. Yes this is a war on the move and the mental images and descriptions that Josh creates are as epic as Age of Sigmar can aspire to be. Vast cities built atop even greater wyrms that wander a vast open plain, the various cities warring with each other and the twisted blights of Chaos that have crept into the world during the Age of Chaos.

Into this we have the Skaven as they seek something a relic from the Old World that was, but they are not alone. For into this destroyed city march the shining beacons of the Stormcast, come to cleanse the great beast and free the peoples of the city and awaken the great Realm Gate nestled in a temple built atop its head. However even their might is not enough to overcome the thick smoke and plagues of the Skaven, allies have to be found not just from the released captives of the city, but also from other races. From an old and ancient race that comes not just to fight the blight of Skaven and Chaos, but with their own motivations and ideals as well.

This is a book filled with magic and battles and Josh expertly balances the forces involved and the heroes that arise within each army. We see and get a fantastic flavour for the races involved and see the personal aspirations of characters as they seek to achieve their various objectives.

The only real criticism I have after reading is that I wish it were longer. I would have loved to have read the beginning of the war when the city was first under siege and the Skaven arose to fight the peoples of the wyrm; and I would love to read more of the story after the events in the book. I really hope that Josh gets to return to the world of the Skaven as he’s got a good talent for writing about these dark, twisted, slightly (if not totally) mad rats.

As I said at the start this is one book that I’d strongly recommend reading, though as noted just below in the links, I’d also recommend that you grab a copy of the Legends of the Age of Sigmar since you can then also tip into the worlds of two other major races as they awaken and throw off the shackles of Chaos invasion; leaving behind the Age of Chaos and bathing in the blood and light of the Age of Sigmar.

I recommend getting this book as part of the Legends of the Age of Sigmar: Omnibus 1 as for the same price as the book on its own, you get a selection of other great novels focusing on the Fyreslayers and the Sylvaneth.

Also available on Amazon and other good book stores.