The following is a discussion based on probability theory (often called dice-theory in wargaming circles) which compares the performance of different weapon options for both the Mortek Guard and the Deathriders; both units from the new Ossiarch Bonereaper army for Age of Sigmar

First lets consider the Greatblade weapon option that you can take for one in every 10 warriors of Mortek Guard. Below you can see a table comparing the results of taking Greatblades in units of different sizes for both Spears and Swords forming the majority of the unit. Remember for each group of 10 models, one is a Greatblade. So for 40 warriors there are 4 Greatblades in the unit.

I’ve chosen to compare two extremes of save for the total damage dealt (since greatblades, spears and swords all deal 1 damage).

Now for one of the most often asked questions regarding Mortek Guard – Swords or Spears?! Again I’ve prepared a table of results:

This table is a little more complicated to read, so to make it a little clearer below I’ve summarised the data into four graphs. Each graph refers to a specific save value for the target of the attacks 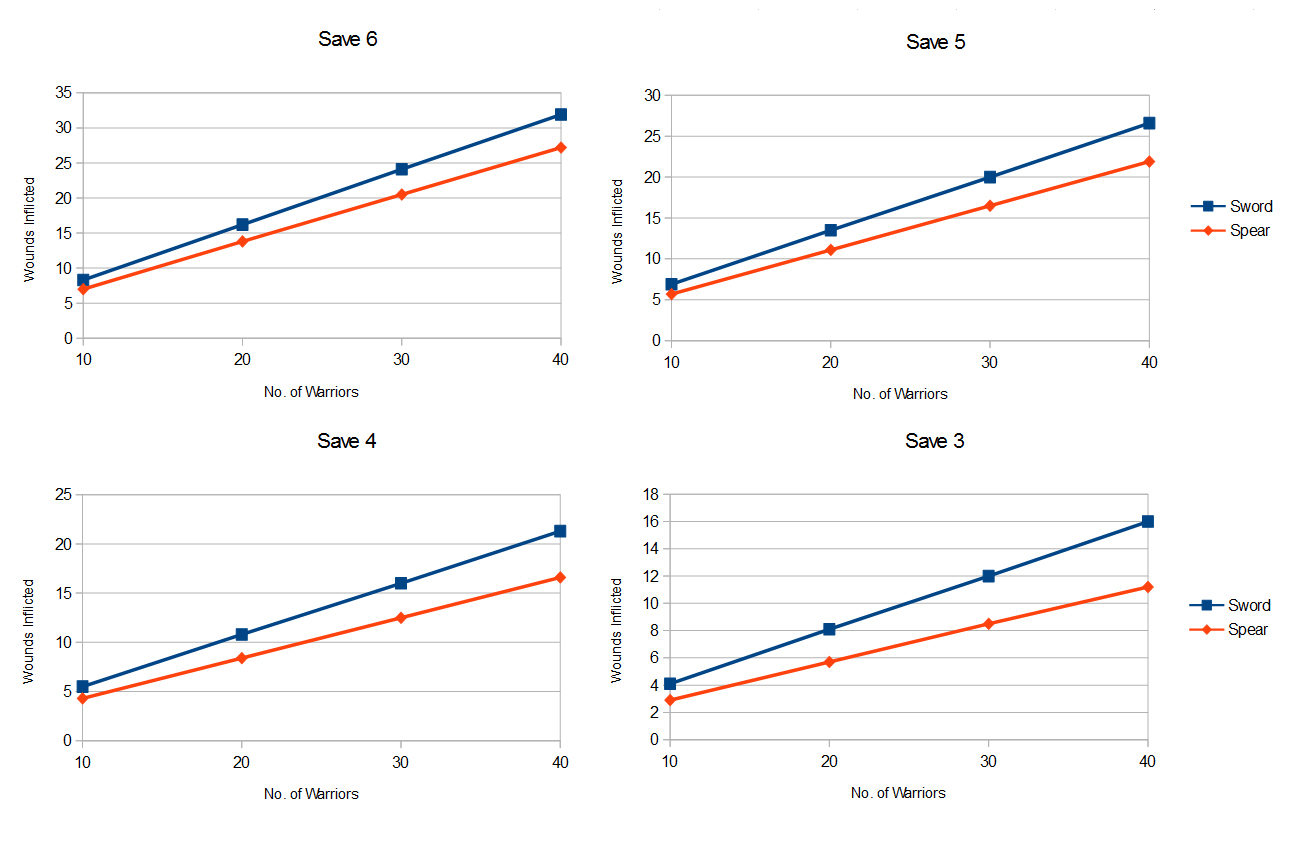 So at first glance we can easily see that when the number of warriors is the same, swords will always have a greater chance to deal more damage than spears. This is the effect of a whole unit having a -1 rend on the swords compared to the spears which have no rending, but otherwise near identical stats to the swords. Indeed as the save value of the attacked unit improves the divide in number of wounds landed between swords and spears increases, with swords very clearly in the lead when in large numbers against a high save target

However its not a totally clear call. If you look at the numbers and at the graph you can see that when the number of warriors holding spears is greater than the number of warriors with swords, the spears tip the balance quite quickly into doing more damage. Now as Mortek Guard with spears and swords have the same point cost, the only variable we have left to play with is the range. Swords only have a 1 inch range, whilst spears have a 2 inch range. As units get larger it can become less practically possible to get all warriors into close combat range. Thus the inch difference in reach can become quite important in the actual game.

Now at your local game tables these stats might vary in how well they impact your game. If you regularly play against big spread out enemy units with very little terrain then you might well find that its very easy for you to get 40 warriors into close combat range with only a 1 inch reach on their weapons. So swords would be the best choice. However you might fight smaller units and on tables with a more dense covering of terrain. Suddenly those speares with their extra reach start to come into their own. So some local variation might take place for you.

In conclusion I would say that whilst swords always have a greater potential to cause more wounds than spears, the practical nature of using them in the game means that spears start to come into their own as the Mortek Guard increase in number on the table.
If you want a rough dividing point where one might switch form swords to spears I would say at 30 warriors. For units of 10 or 20 its very possible that you will get all units into close combat range with only 1 inch of range. Therefore the bonus to rend is far superior to another inch of reach that you might not ever need. Once you’re up to 30 or 40 models you’re into a scale where that extra inch of reach is going to start making a growing difference in the number of models that can contribute to each round of combat.
Of course keep in mind the nature of your opponent as well. An opponent with lots of high save targets that are spread out is going to really benefit taking swords against; meanwhile if they are armed with mostly 6 save models; the extra reach of spears is going to be more important – especially since such armies tend to be larger so landing more hits is more important than the power of each hit.

So we’ve tackled the Mortek Guard, but there’s one more where the debate of spears or swords arises, the Deathriders.

So this one is not as tricky to read as before (and doesn’t fit into a chart as easily). What its showing is actually rather sad in a way because swords are beating spears in every tier. Even on the charge when the spears get to cause two hits on a 5 and 6, the rending of the swords still keeps them above the spears. The rending just makes a huge difference in maximising what the swords can do with the attacks they make.
Again we see that same pattern that in order to get the most out of spears its going to be with big units where not every model will easily make it into 1 inch range to contribute to combat.
Importantly the charge bonus that spears get only just levels the playingfield with swords. So in order to maximise the potential of spears you really want to be retreating and charging as often as possible. Otherwise you want a large unit so that you really are using all of that 2 inch range on the weapons to get every warrior into battle.

Overall its a shame that GW didn’t manage to give spears and swords a bit more division in their overall performance. It’s also strange that, since spears featured so heavily in the artwork and early photos of the army (and honestly look darn impressive on the models) that they’ve actually turned out quite the underdog in anything but massed forces.
That said the differences here are quite marginal and I’d wager that on the tabletop they would be very hard to reliably see.